1.  Lucky people don't have stories, and I was lucky, so I do not have a story of my own.  Our street in West University didn't flood, and water never threatened to enter our home. We had plenty of food.  Our electricity never even flickered.  The extent of my personal suffering was stress from watching the water rise.  Thousands of my friends and neighbors do have stories, though.  Some waded through chest-deep water, with death-grips holding onto their children and pets; some watched everything they owned float away, their most valuable asset inundated and ruined; hundreds climbed onto their roofs, waving white flags at orange helicopters; hundreds more clamored onto flat-bottomed aluminum boats, some operated by professional rescuers, many more piloted by volunteers from around the state and eastern Louisiana.  I have friends whose homes flooded for the third time in three years, and others who, until Harvey, had always stayed dry.  I know some whose upper-story apartments were high above the flood, but still required rescue when water poured into the first and second floors, knocking out power and gas.  I know I said only unlucky people have stories, but here's the thing:  If you ask them, they will say they are lucky too, that all they lost was stuff, that they and their loved ones are healthy and alive, that they are ready to rebuild.

2.  Five years ago, Hurricane Sandy destroyed a staggering 650,000 homes in New York and New Jersey.  Both US Senators from Texas voted against extending federal aid to Sandy's many victims.  I had friends among those who suffered, and felt shame my fellow Texans and I had sent these two embarrassments to represent us.  This morning I caught a glimpse of one of them, Ted Cruz, talking on TV about how the federal government was here to help.  He resorted to bald-faced lies to explain why, despite all appearances to the contrary, he is not an opportunistic hypocrite; but explanations consisting entirely of alternative facts don't fool us down here; and besides, as we say in the law business, if you're explaining, you're losing.  But I am trying to focus on the bright side, which is this:  Even glib charlatans like Cruz have value. My wife and I have always tried to teach our son you can learn from bad people just the same as you can learn from good people. The latter you emulate, the former you don't. What people like Cruz and Cornyn teach us is that the opposite of empathy is selfishness.

3.  Speaking of selfishness: Even though his megachurch is just a stone's throw from our house, I had never paid a lick of attention to Joel Osteen's supposed theology.  Only after he declined to open his church until being shamed into doing so on social media did I discover that he's the highest-profile contemporary purveyor of the so-called prosperity gospel, the modern incarnation of pure Calvinism which, stripped of its biblical citations, boils down to this idea:  I'm rich and you're not; hence, God must love me more.  So yeah, Houston has people not all of us are proud of.  But we also have Jim McIngvale, AKA Mattress Mack.  If you are too young to remember Crazy Eddie, or didn't live in the area where he advertised, watch this, and you'll know how I felt about Mattress Mack the first time I saw him on TV, assuring me I would save money if I bought my furniture from him.  So while Pastor Osteen was dragging his heels about taking in the homeless and displaced, Mattress Mack was sending his delivery trucks into the floodwaters to bring those same folks back to his store, where they slept on mattresses, sofas, and theater-seating on display in his massive North Houston flagship store.

4.  Like many Houstonians, I have a love-hate relationship with the city.  I hate the traffic.  By September, I hate the heat.  I hate the mosquitos.  As an avid mountain biker, I hate the lack of gradient.  (Yeah, yeah, I know some fervent Houston boosters will remind me of the Ho Chi Minh trails in Memorial Park.  I love Memorial Park.  I suffered actual physical pain when the drought of 2011 destroyed so many of the Park's majestic pines.  But to paraphrase that great Texas Lloyd Bentsen, the trails are definitely not Utah; they're not even Colorado.)   But there is way more to love: I won't talk about the diversity, the museums, the arts, or the food, at the moment, because I really want to focus on the people -- community leaders, elected officials, and just ordinary folks.  You just cannot believe the people.  On Sunday, during a brief lull in the torrential rains, my son got into a kayak and I got on a bike, and we made our way to the edge of Bellaire, a community adjacent to ours.  A normally busy tree-lined boulevard was a river.  I stood on the railroad tracks separating the two neighborhoods, and flagged down pickup trucks as they approached from the east warning them the road was unpassable just ahead.  Driver after driver told me they were just looking to see if anyone needed a ride.  I watched one young man pull his four-wheel drive with a Texas flag in the window and a toolbox in back into the median and wait. From the distance, a shirtless man with two children and a dog approached.  I heard the man tell the kids to be careful of fire ants.  They reached the truck, had a brief conversation with the driver, and climbed into the bed.  A few minutes later the truck returned.  He'd dropped the family at a staging center a couple of miles away where busses were taking people to a refugee center downtown, and come back to offer someone else a hand.   Multiply that guy by a thousand, by ten thousand, and you'll know why people who live here in the nation's fourth largest city often think of it as a small town. 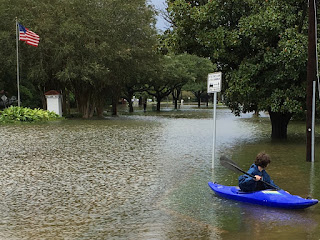 5.  One of the local TV stations got flooded, but they stayed on the air anyway, reporting which freeways were unpassable (eventually it was pretty much all of them) and broadcasting the location of people awaiting rescue.  The anchors all sat around a table in a makeshift studio, looking like they hadn't slept in three days, probably because they hadn't.

6.  Speaking of not sleeping, Sylvester Turner, the Democratic mayor, and Ed Emmett, the Republican county judge, proved that what matters when it comes to relief efforts is not political party, but sheer competence, and both coordinated an effort that epitomized competence.  While our Governor was urging nearly 7 million people to evacuate, proving he apparently has no clue what sort of chaos ensued when a mere two and a half million people tried to leave at the same time during Hurricane Rita in 2005, local officials were managing high water rescues and arranging for refugees to be housed at the convention center and in other cities.  (Note to the Governor:  more people died on the road in 2005 than during the storm.)   So yes, the hypocrisy of our Senators embarrasses us, but our local leaders, of all parties, make us proud.  In fact, Mayor Turner and Judge Emmett proved how much of our politics is backwards.  People sometimes talk about shrinking the federal government and giving power to the states.  But, at least when it comes to Texas, that's a doubly bad idea. The federal government has money and people.  Local government has expertise and knowledge of the community.  The unit of government with nothing to offer is the state.  Case in point:  Our legislature just wasted time and money by policing bathrooms and targeting immigrants, rather than fixing the tax and education systems.  If it were possible for the urban areas in Texas to secede we would, and we'd be better off for doing so.

7.  On the subject of immigrants, I will limit myself to two observations. First, tens of thousands of houses, at least, are going to require major repair. Guess what language you're most likely to hear being spoken by the crews doing the lion's share of the work. Second, we do not yet know how many, if any, of Harvey-related deaths resulted because someone without legal status was too scared to dial 911.  Maybe none of them will, but if there is even a single such fatality, I'd like to see President Trump indicted for murder for emboldening ICE and CBP officials to troll in places where vulnerable people should always be safe.

8.  When the streets became clear enough for us to get out of our neighborhood, our son, a high school junior who got certified earlier this year as an emergency responder, headed off for his Harris County Medical Reserve Corps assignment, while my wife and I drove over to Lakewood Church.  Bags of clothes were piled fifteen feet high in a circle with a diameter of fifteen or twenty feet.  In Houston, it would pass for a mountain.  Outside, a line of cars snaked forward with people bringing food, medicine, and other supplies.  One group of volunteers carried the donations inside while others sorted the bounty.  I heard English, Spanish, French, German, Hebrew, Arabic, Russian, and another language I couldn't identify.  I saw every shade of human pigmentation.  I took a few pictures and some video.  (You can see them below.  Everybody pictured is a volunteer; the people using Lakewood for shelter were being processed in a different area.  For what it's worth, they too represented every possible racial or ethnic group.)  I'd like to send them to Richard Spencer and the folks who marched with him in Charlottesville earlier this month.  So if you have his email addresses, I'd appreciate it if you'd pass it along. 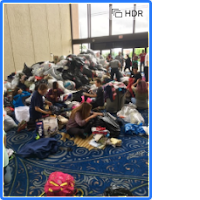 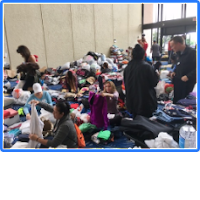 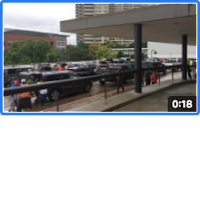 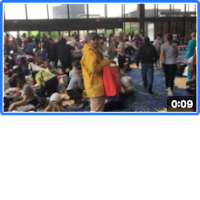 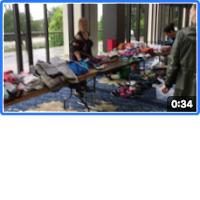 want these blog posts coming to your email?

confessions of an innocent man (dutton 2019) (one of the Wall Street Journal's best books of 2019).
things i've learned from dying (twelve 2014) (one of NPR's best books of 2014).
the autobiography of an execution (twelve 2010) (national book critics circle award finalist for memoir, and winner of the barnes and noble discovery award for nonfiction).